Updated review.First off, this collar has a sleep mode. If you do not use it for a certain period of time, the collar turns off to protect battery life. This works well when your dog goes outside for short period of times. I have been able to get the collar to stay on longer if I check it before allowing the dog to go outside.As for training my dog not to bark, this collar works better than any others I have used. I started with just the beep, if the dog continued to bark then I used the vibrate mode. If that did not work, then I used the shock mode on a low setting (know that the collar has to be tight on the dog for the shock mode to work). My dog quickly learned that the beep meant stop barking.I had an issue with the first collar I purchased and when I contacted the DogCare, they immediately rectified the situation, replacing the malfunctioning item. When I contacted DogCare the second time with an issue, they immediately replied and again rectified the situation. Their customer service has been outstanding.

F
FogCityFamily
I wish I'd found this months ago!

While on a waitlist for obedience training, we've struggled with our Golden Retriever's less than desirable behaviors like counter surfing, stealing food off the kid's plates at the table, jumping on guests, getting up onto the couch, nuisance barking, etc. I wasn't aware obedience collars like this existed, with beep and vibrate options w/ a remote instead of only bark-activated static shock. I don't like the idea of shocking my dog, and I don't want him afraid to bark when he needs to. We've only used the vibrate setting and it's working better than I ever thought possible! WITHIN THE FIRST DAY his behavior altered so dramatically, it was almost unbelievable. He stopped searching for nibbles on the counter, he now lays under the table during mealtime instead of constantly poking his head up to sneak food of the kids plates, he isn't jumping on us anymore, he no longer barks for attention (which he receives plenty of)... I could go on and on. It's all due to quick behavior adjustment on my part (you have to be vigilant in the beginning) w/ a simple tap of the remote, delivering nothing more than a vibration that he clearly doesn't enjoy but causes no pain. I tested it on myself! I cannot speak to all breeds, but this has worked for our Golden Retriever and it's completely alleviated the chaos from our home. Indispensable!!

D
D. M. B.
Amazing Results in One Day

I have a very hard-headed, stubborn 7-month old Boston Terrier, as well as an older Boston and Schnauzer. The puppy would not leave my older Boston alone. Biting on her ears, jumping on her, just aggravating her to pieces. At snack time, she would finish her treat and try to steal the others. No amount of correction helped. I even smacked her butt with a fly swatter to no avail. She just kept coming back for more. Let me add that I know it's puppy behavior, but still, she needed to learn some discipline.I ordered this on a Sunday and it was delivered the next day. I let it charge and put it on the pup. At snack time, she tried to steal the others treats as usual. I tried the beep with no luck, then the vibration with no results. Finally, I did a mild shock. That did it! Now, all she needs is the vibration. This morning after they ate, they got their treat. I was ready with the remote. She started for the other dog's snack, but one hit of the vibration button stopped her in her tracks. Let me add that I follow up with a stern "NO!". She sat quietly for the rest of the time while the other two finished their snacks. I also follow up with praise when she listens.I am amazed at how quickly this worked. Granted, it's only been a day and a half, but so far I am beyond pleased. I will update again in a week or two.UPDATE: Four days later and all she has to do is SEE me pick up the remote and she stops whatever bad behavior she was engaged in. She truly is like a different dog. I'm so pleased with the results. Wish I had bought this a couple of months ago. My older Boston, Daisy, appreciates it as well as the puppy has now stopped biting on her ears.UPDATE: Still working as far as controlling bad behavior but the collar has started losing its charge after one day. Even when it says it has a full charge, it's not working. Doubt I can return it this late. Very, very disappointed because I really was pleased with this in the beginning.

K
Kdiddle
Less than 12 hours wearing it and I'm seeing A HUGE improvement in my 6mo westie!

My puppy is set to become a service dog and I was starting to get worried because he's been much slower and more stubborn than my last. There's really no room to mess up with their training and the early days really matter so I decided I needed some extra assistance this time and I'm REALLY glad I did!Prior to purchase I was having problems managing his barking at people walking by; eating the cat food; frequently peeing off his pads (despite knowing where they are and using them when he feels like it; eating biscuits from the cat box & being overly playful with my 18yo cat (not trying to hurt her, Just unaware of his size and being too rough).In less than 12 hours since we started using this collar...*I've stopped 3 accidents and got him to the pad.*He pooped on command this morning.*Left the cat food alone with only one beep then after that all it took was "no".*Left my cat & the cat box alone with no beeps needed (just verbal no).*Stopped barking at passersby with one vibrate ((not shock) after three no's and beeps didn't work).The greatest part is everytime he listens (even after a correction) I get to give him a reward so he doesn't have a negative experience when he finally "gets it"!I recommend this collar for sure! But it's up to the owner to be consistent for it to be effective. It's easy to use and makes a big difference.Some "suggestions" for training from someone who has trained a few dogs and handled a service dog for 14 years. ***Try at your own risk****use the same STOP word (and ONLY) that word ever time to avoid confusion (if your dog doesn't understand what you want from him/her you'll cause confusion which will create anxiety for your dog and make matters worse). In our case I use "NO".Use the stop word to break the dog of any behavior you need to extinguish (jumping, barking, eating cat food, begging etc)Many people make the mistake of trying to teach a dog many phrase such as "down; no barking" ect but by using ONE stop word instead of many you streamline the process.Once you have their attention and they are listening more consistently you can add those phrases AFTER your stop word so that they'll begin to recognize them when said by others.The most important thing to remember is that EVERY TIME your dog responds to you stop command you have to give them a reward whether it be a verbal or a shock it doesn't matter, you want your dog to associate the rewards with the desired behavior so you have to reinforce it.OK so you've got your stop word... This is how to use it. In the beginning you'll want to be strong confident and forceful with your verbal communication.It's important that you can do this w/o having to physical contact with your dog so work on training then in situations where safety isn't an issue.You give your dog a verbal stop, usually it's best to start with three times don't yell, Just be consistent, if they don't respond you again give a verbal stop and hit the beep, continue this three times.If the dog still isn't responding, stay calm and repeat the process with the static and only as a last resort the shock.When you get further along in the training it's OK to forgo the 3 warnings each time and by then it's actually better to mix it up because if they can't predict it they're more likely to respond faster.I hope this is helpful. Best of luck!

I have 18 month old Husky/Shepherd who has a ton of energy. I tried keeping him fenced in our 5 acres, but he’s gotten big enough to jump the fence or dig under. I tried the invisible fence, but he run though the shock. So now I have to keep him tied up, because he loves running off and going into our neighbors’ yards. My co-worker advised me to try this product, and in just one day of using it, my bog is the calmest I’ve ever seen him. I only had to shock him once to keep him from running off, and gave him warning beeps after that. He calmly laid at my feet for the rest of the afternoon. He doesn't even seem like the same dog. 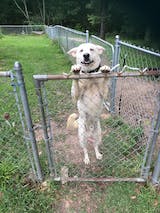