So far it is working, I have an English Bulldog four months old that has a bitting issue. No it is not your normal puppy bitting it made me go for stiches twice. One time on the leg and two weeks later on my lips, she jumped on my face while I was correcting her as the trainer taught us.I spent $1.6 k on training at home and at a dog-school and she still has issues. I had to have her on her choke leash inside the apartment all the time and she has not.giben up the strong bitting.The kennel owner did advise she as the litter alpha, but he said that she had the best bulldog temperament as well. And she does, she is sweet but also thinks she can dominate us.So I got this collar sent over to Brazil where we live, it arrived rather quickly within a week. Taxes and duties where paid by the DHL carrier even though it was not necessary, we only pay duties on imports that are over 50 dollars here. I never understand why that happens with shippings to Brazil, they always pay duties even when it is not necessary.The ecollar box inside did not had a seal, but it appeared to be new with the exception of the controller that has tiny scratches on the LCD.At a total cost of 100 dollars I could not send it back, maybe that is why the seller sent it to me, he knew International shipping was not going to complain and lose $100.Things I miss:-A clip on for the controller-The ability to adjust the intensity of the static as you press the static button. My puppy has not felt anything until 20 so I had to keep doing the static until she felt, I was a little scared of that because for me level 4 was enough ( on my skin).-a more comfortable collar, bulldogs have sensitive skin and the material a very harsh nylon.-easier way to adjust for sizeNow for the works:On the first day, I just used the vibration for correction, and bell for positive reinforcement (as a clicker). It worked very well on that first day and we use it for 5 minutes only as it was late.The second day we went for a walk, she stops at every single person to say hello, and I always had to choke her to continue the walk. With the vibration it worked but not all times.She started paying more attention to me without having to give short pokes on the chocking leash as the trainer told us to.At home when playing with my son she started to rough play biting him, then I turned to the static and I had to do the tries until found a correct level. We always use the shiii or ah command with the static so she knows that we are correcting her. She stops and started answering better to the "shiiii" and "ahhh" command when we want her to stop. We have been using it for three days now, so we still have a long way to go.I told my son that she needs to be wearing it everytime she is with us to avoid any other bad accidents, and if not she needs to be on the leash. He does not like the static, but he knows she can hurt us and will get worse as she grows, so she needs to learn to behave within the next two months.Training a dog is hard but I hope this device will make it easier for us. I had several dogs throughout my life , I trained them all without this device.I trained bulldog Campeiro to work with cattle when I was a teenager and lived in a farm, I trained a doberman for agility, I trained a cocker spaniel when I moved to an apartment in the big city. I trained a Whippet as a companion. Never had a biting issue, I was very close to returning the puppy to kennel and cutting out my losses, but we do like the puppy. And the professional trainer is also a behavioral trainer so we felt the need to give it the last shot.In two months I will update here.

This collar is very easy to use and my dog learned quickly what was good and what not to do. Barking was a problem but in a few days he knew to stop when I said stop. This collar has a warning signal which is usually enough. I never had use the shock feature. My dog and I really liked it.

I received my dog Tuckers collar today. It came charged in the box. I immediately put it on her and put it to test. I was worried about the shape of the collar, and if it would get caught on things being she likes to dig around by the deck etc. Its contoured great for no snagging and no sharp ends to it. It fits her comfortable. The vibration mode has done the trick so far, and if I need too, I'm sure a little poke with the shock will help with her taking off to the neighbors to visit their dog Toby! Very satisfied with this collar, and I would recommend it to anyone that is having an issue with your dog not listening to you when outside. It's multi function of beep, vibrate and shock along with intensity shock are great! It arrived on my door step, and I put it on Tucker first thing and she is sitting right next to me on the deck while the neighbor dog is out barking at her. I hit the vibrate continuously and she stayed right next to me. Great feature!! Very pleased with this product!!!!

This is Collar is amazing; it has three different types to train your dog, vibration, a sound and a shock; needless to say, my dog has recognized when he has done wrong and as soon as he sees me with the remote control in my hand, he stop his behavior. I recommend this product. 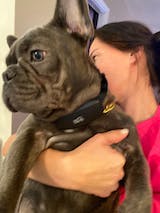 J
Julie G.
Quality and reliability at an amazing price!

This is such a great collar! I have a five-year-old chocolate labrador retriever that still think she is five months! She can be a real handful. I purchased this color at the unbelievable price of $34! The first color I ever bought at a well-known outdoor store that we all know was well over $100 and did not hold a candle to this collar! The two biggies with this collar compared to my first one that was 4 times more $ is how long the battery life lasts and how long of a distance I can use the collar. We live in the middle of nowhere with 10 acres of heavily wooded area around us. Our dog likes to go out in the woods get on the scent of something and not listen to us when we call her back. The great thing about this collar is all I need to use is the beep or the vibration. Those two things alone make her do a complete 180 and come right back. I don’t have a moral issue with using the shock… If my dog is running towards the road I have no problem giving her a poke rather than her getting hit by a car! It’s just in our situation with her just being out in the woods and not listening the beep has been more than enough to change her behavior. I’ve had it for 10 days and it’s just been amazing. Our next quest is to get her around people and use the collar to keep her from jumping on people like my in-laws and such. She is a lover girl and does not listen well when she’s excited. As far as the collar it’s self and the remote control… I don’t have a ton of experience with different ones so there is nothing negative for me to say about either of them. I like the fact that the remote locks so I don’t accidentally zap her… I like how big the screen is so I can see it well. And like I said before battery life is amazing and so is the distance.I highly recommend this even if it were a lot more money… At this price there is absolutely no reason not to grab one if you need it.